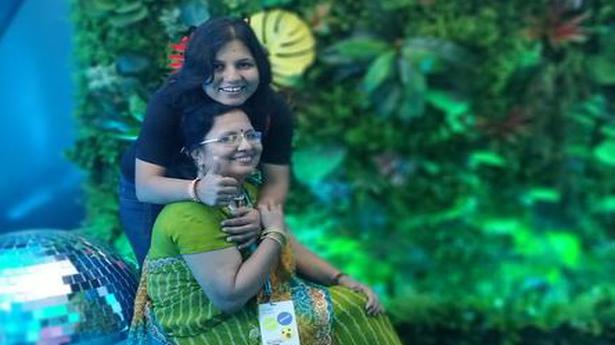 Founded by Vijay Haldiya and daughter, Apeksha, it has recipes specific to different parts of the country uploaded by women of all age groups

“Jo dikhta hain, wahi banta hain Zayka Ka Tadka mein (What you see is what is made in Zayka ka Tadka).” That’s Apeksha reeling off her trademark dialogue in the midst of a busy shoot with Shveta Sheth, as the latter prepares a paneer dish at her kitchen for Zayka Ka Tadka.

Founded by Apeksha and her mother, Vijay Haldiya, it is an online platform where mothers from across the country can upload their vegetarian recipes. Around 700 moms have been covered on the platform, which was launched as a food blog in 2014. It now has over 4.6 million followers on Facebook, over five lakh subscribers on YouTube, 2.8 lakh followers on Instagram (@zaykakatadka) and a website by the same name.

“Cooking has always been a passion. When I cook, I feel de-stressed. Now it is like meditation,” says 60-year-old Vijay. Growing up in a joint family in Rajasthan, Vijay took to cooking at a young age. Eventually, social media opened up a new world for her. She cites herself as the best example for how women can use technology to realise their dreams. In fact, Zayka’s Instagram page declares that ‘This account is handled by Vijay Haldiya’.

But without her daughter Apeksha, Vijay’s social media outing would not have happened. “Mom was part of an online group of home chefs. One day she got removed from it because she was getting more attention than the other members! That disheartened her. So I started a blog, Zayka Ka Tadka, for mom to post her recipes. She gained so much appreciation that it did wonders to her confidence,” says Apeksha, who gave up her corporate job to start the platform. Within a few months the blog became an online recipe- sharing community, then a text recipe-sharing platform in 2017 and, a year later, a platform to post videos.

The page has a diverse platter with recipes specific to different parts of the country being uploaded by women of different age groups. Besides featuring both new and experienced cooks, it has also brought grand old homemakers from villages in North India to the limelight.

“We keep it real and organic by making them cook in their comfort zone, which is their own kitchen. Any mom who can cook can contact us via our social media handles. We will be at their kitchen to shoot the video. But for the pandemic we would have travelled to more places, especially to states in South India,” says Apeksha.

Videos of new recipes are posted everyday on the Facebook page. In addition to traditional and regional recipes, five-minute recipes are also posted. Segments on chutneys and sauces, paneer, lunch recipes, dishes prepared with left-over food, parathas and chaats are some of the popular series on the page. Cooking tips and contests (like the Zayka Premier League) are uploaded as well.

“During the lockdown, we put up recipes that are easy to prepare. The traffic on the page has increased since then. In fact, men who have never entered the kitchen are now avid cooks,” says Apeksha.

An achievement, the duo says, has been bringing visually challenged women on board to showcase their culinary skills. “We organised a cooking contest for them in 2018. I was inspired by a speech by Shekhar Naik, former captain of the national blind cricket team under whom India had won two World cups. He helped us organise the competition. That event has been one of the best moments in our journey. When you watch them at work, you learn how to live life fully and happily in spite of drawbacks,” Apeksha adds.

The mothers, too on the other hand, are ecstatic about being part of Zayka. Shveta says, “There was a time when I didn’t want to try anything new. But that has changed. When everybody starts loving you and the food you cook the feeling is beyond words.”

Apeksha points out that Zayka Ka Tadka will continue to feature more mothers. “The platform is all about giving them the appreciation they deserve. At the same time, if men evince interest, they are also welcome,” Apeksha says.