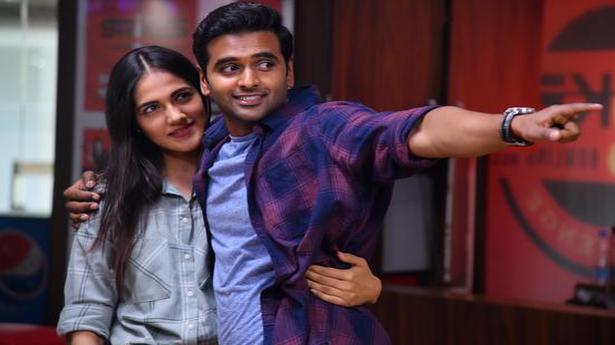 The team behind sci-fi Telugu flick ‘Bombhaat’, discuss their attempt at making a low-budget, lighthearted film in an uncommon genre

Actors Sai Sushanth Reddy and Simran Choudary pick Steven Spielberg’s E.T (1982) as one of their favourite science fiction films. Sushanth and director Raghavendra Varma Indukuri also fondly recall watching the Telugu film Aditya 369 (1991), directed by Singeetam Srinivasa Rao. “Watching it as a child, I thought it was so cool because people spoke Telugu in a science film, not English,” Sushanth laughs. The trio talked about science fiction and making it entertaining and accessible to non-nerdy viewers, ahead of their Telugu film Bombhaat which will begin streaming on December 3 on Amazon Prime Video.

The director reckons that Aditya 369 was an inspiration to make an entertaining science film for present-day viewers: “Time travel was a unique concept back then and Aditya 369 explained it in a way that everyone could understand,” he reasons.

Written by Akshay Poola, Bombhaat was filmed in 2019 and several titles were considered. “We initially thought of ‘Baby’ but couldn’t register it. We considered several names and then finalised the colloquial Telangana expression ‘Bombhaat’ which is an expression for ‘super’. We thought Bombhaat would have a ‘mass connect’,” says Raghavendra.

In Bombhaat, Sushanth’s character deals with a spate of bad luck and takes the help of Simran, a humanoid, to win over Chandini Chowdary. Simran and Sushanth earlier starred in the buddy flick Ee Nagaraniki Emaindi (ENE, 2018).

After ENE, Sushanth was offered rom-coms but says he opted to wait and explore a story that’s not often told in Telugu cinema. “I am like a regular college guy but a bit silly considering that when I meet a humanoid, I take her help to win over someone else.” Unlike his previous film where he spoke in a Hyderabadi Telangana dialect, he stuck to a neutral Telugu dialect to appeal to both Andhra and Telangana viewers in this film.

Antariksham 9000 KMPH (2018) was the recent science fiction, a space journey, from Telugu cinema: “That was a serious science film with stars and a bigger budget; ours is a fun film,” vouch Raghavendra and Sushanth. Raghavendra also cites an Alfred Hitchcock quote to state that drama begins where logic ends: “One shouldn’t expect logic in our film.”

As far as mainstream Indian masala films go, a robot with emotions would immediately draw references to Rajinikanth’s Chitti in Shankar’s Endhiran and 2.0. The gender switch apart, the director vouches that Simran’s humanoid characterisation is vastly different. “She would probably be the next version of Chitti,” he says, adding, “Many would know how the humanoid Sophia rejected actor Will Smith [on a date]. I found that interesting.”

Simran gets to do action sequences in the film and says that was easy, given that she’s a basketball player, a fitness enthusiast and a classical dancer: “The tricky part was understanding what emotions to highlight and what to underplay as a humanoid. We discussed a lot and then I knew how to strike the balance between playing a woman and a robot.”

The film also deals with the trope of good scientist Vs the evil: “In the broad sense of good Vs. evil battle, it is a predictable drama, but one that will be a lot of fun,” promises Raghavendra, who considers veteran Telugu filmmaker Raghavendra Rao his guru. Incidentally, the film is presented by Rao.