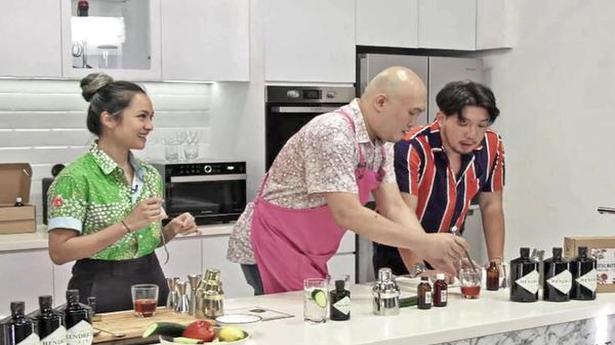 Age-old bakeries, Michelin-star bars, sessions on the harvesting of durians… here’s how this year, the fest is reaching out to global tourists in their homes instead of drawing visitors in

Even those who know nothing about the durian, know about its smell. The fruit, an inherent part of many Southeast Asian cuisines, is synonymous with a strong pungency that has notoriously been mistaken for gas leaks and caused evacuation of buildings. So how do you conduct a masterclass about the famous fruit over the Internet, where its signature scent would be missing? For Chef Chung Deming’s online masterclass this past weekend, it was barely an issue — he had much more to share with the audience.

“They can be sweet, bitter or bittersweet. Their meat comes in different colours: it can be red, yellow-ish or very white-ish. There are many characteristics you can tell from their colour — something on the orange side tends to be sweeter, something white tends to be more bitter. Over the long and complex cycle in which they are harvested, different flavour profiles are also developed. You get stronger flavours the longer the fruit stays after harvest; some varietals can also be slightly alcoholic, and others can have a milky texture.” All this weighs into how the fruit can be eaten and — more interestingly — what wine to pair it with. “Dry whites like a Riesling go best. Avoid the reds; anything with tannins will not go well with a durian,” says the chef.

Chef Deming’s online masterclass, which covered the intriguing fruit’s journey from farm to plate “and everything people might not have known while shipping the fruit to their part of the world”, was one of dozens of sessions focussing on the food of Singapore over two consecutive weekends. The festival also includes — and will include in the coming weekend — virtual food tours of streetfood hubs and uspcale dining destinations, sessions with bartenders and pastry chefs from many of Singapore’s Michelin star restaurants like Burnt Ends and the speakeasy bar Nutmeg & Clove, and a deep look at Singapore’s many, long-lasting culinary influences, including Indian expatriate food cultures and the rich natural ingredients of the Straits.

Says Lim Si Ting, area director of Singapore Tourism Board India, “This remains the only food festival in Singapore that focusses on local cuisine. Being on ground was an important part of the festival, with visitors trying out the different cusines and interacting with experts. But the virtual edition has given us the opportunity to reach out to people we would otherwise not have access to; like working adults around the world who do not travel overseas very often.”

Imagine, for instance, virtually following a guide into Tan Hock Seng, an 89-year-old iconic bakery known for its Hokkien pastries. Or strolling through Chinatown and its typical cultural blend, taking in the sights and sounds (if not the smell), without having to pay for a plane ticket. Chip Guan Heng, one of Singapore’s oldest ice cream distributors, also features in one of the tours, as do quaint old restaurants harking back to the 1960s. There are sessions that focus on the Indian spice route; on bite-sized, brightly coloured desserts called kuehs; comfort foods of the Peranakan ethnic group …

The scope for culinary discoveries is not just restricted to curious minds abroad. “We tend to focus on international tourists, to showcase Singapore as a culinary destination. Now we are focussing on local visitors, too. Internal travel will pick up before international, and there is a lot for Singaporeans to explore about their own land and food,” adds Lim Si Ting.

There is no denying that the festival is a key push for tourism, even in a year when actual, physical visits are dificult. “It is a part of our Singapore Discover campaign, under which we have categorised our visitors based on their interests. This festival, of course, caters to the foodie category,” says Lim Si Ting, adding, “The schedule is much more packed this year than before. We are excited.”

The final sessions are spread over August 28, 29 and 30. For details, visit singaporefoodfestival.sg

You have reached your limit for free articles this month.

Find mobile-friendly version of articles from the day’s newspaper in one easy-to-read list.

Move smoothly between articles as our pages load instantly.

Enjoy reading as many articles as you wish without any limitations.

A one-stop-shop for seeing the latest updates, and managing your preferences.

A select list of articles that match your interests and tastes.

We brief you on the latest and most important developments, three times a day.

*Our Digital Subscription plans do not currently include the e-paper ,crossword, iPhone, iPad mobile applications and print. Our plans enhance your reading experience.