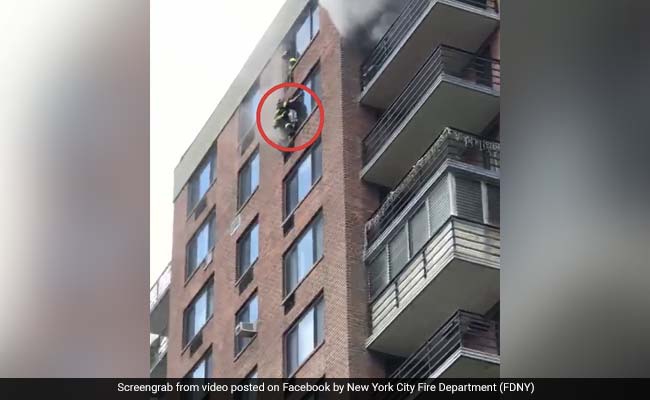 Firefighters in New York carried out a rare roof-rope rescue.

The New York City Fire Department is being applauded for carrying out a daring rescue during a high-rise fire. The fire department received reports of an apartment fire in Manhattan on Tuesday, according to ABC News. Firefighters reached the spot to find a woman panicking on the window sill of her 16th floor apartment. To save her, they decided to utilise a rarely-used maneuver – a roof-rope rescue.

“There was a woman on the window sill, outside of her window. So I basically just stayed at the window and tried to calm her down and tell her not to jump,” said FDNY firefighter Brian Quinn to CBS News.

The woman was terrified to back into her apartment, which was on fire. To rescue her, firefighter Quinn scaled down the building with a rope from the 17th floor.

“He was like Spider-Man, Superman, coming out that window, encasing her body to make her feel safe,” Kyra Walker, a neighbour who witnessed the scene, said.

A video of the dramatic rescue was shared on Facebook by the fire department on Wednesday, where it has since gone viral. Watch it below:

Since being shared, the rescue has garnered over 2,000 ‘likes’ and dozens of comments praising the courage of the firefighters.

“Absolute bravery right there!! FDNY has nerves of steel!” wrote one Facebook user.

“Great heroes! They put their lives on the line too,” another remarked.

After the roof-rope rescue, crews were able to extinguish the fire and the woman was brought back inside.

Days After US Desert Mystery, Another Metal Monolith Found In Romania

Smriti Irani’s ‘Don’t Angry Me Look’. Check It Out Here

This Baby Elephant Found A Friend In A Dog. Watch Their Adorable Video