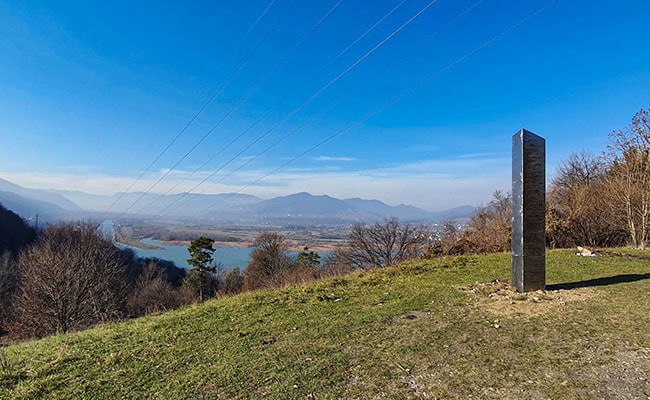 A metal monolith which mysteriously appeared on a hilltop in northern Romania has sparked curiosity — and mockery — online, coming just days after a similar object was found in the Utah desert.

Images of the four-metre tall metal object were first published last week by local news outlets in the Neamt region.

The Jurnal FM radio station went to investigate the monolith after an email about it arrived on Thursday.

“We were surprised to say the least when we found a… metallic structure which had spirals engraved on its sides”, the station said in a story posted on its website.

Local news outlet ziarpiatraneamt.ro also published a video taken by a man who went to the hilltop to see the object for himself.

In a video posted to Facebook, the man says the object is “just some old scrap metal that somebody placed here”.

Others noted the object had obvious welding marks.

Asked about the reactions to the structure, reporter Cirprian Solomon of Jurnal FM says the attention it has garnered “has a lot to do with Utah”.

“There are a lot of unanswered questions,” Solomon told AFP, adding: “Why in Neamt? Why now?”

Those still curious to view the mysterious object up close for themselves may have lost the chance, as the pillar already seems to have vanished.

“The monolith disappeared on November 30, just as mysteriously as it appeared”, Jurnal FM wrote in an update to their story.

Smriti Irani’s ‘Don’t Angry Me Look’. Check It Out Here

This Baby Elephant Found A Friend In A Dog. Watch Their Adorable Video